More of your recombinant proteins with less background

The BL21 Gen-X™ E. coli is a next generation genetic variant of the standard BL21(DE3) strain. The BL21 Gen-X™ strain was created through careful cycles of mutagenesis, enrichment, and testing to provide a new and more powerful protein expression bacteria.

These special E. coli cells have a slower growth rate and characteristics that lead to significantly higher recombinant protein expression, while exhibiting much lower endogenous or background bacterial proteins. The results are clear, the BL21 Gen-X™ strain, along with the powerful Gen-X™ Induction Enhancer, will express more of what you want, and less of what you don’t in vivo.

With the BL21 Gen-X™ Competent E. coli Expression Kit, there is now a better way to express your genes in bacteria: higher yields and lower amounts of contaminant protein will provide you with easier downstream purification and processing, saving you significant time and money.

Cells were grown and induced as described in Figure 1. Additionally, 220ul of the 10X Gen-X™ Induction Enhancer were added at the time of IPTG addition; downstream processing was the same.

However, the net result is a protein yield of higher purity due to the relatively lower background. In other cases, the Gen-X™ Induction Enhancer is essential for abundant target protein expression; for example in Lane 2, the 60KDa recombinant protein was observed only in the BL21 Gen-X™ cells along with the Gen-X™ Induction Enhancer, while in lane 8, the induction enhancer was responsible for increased expression of the 69 KDa protein.

Ten 2 ml cultures of BL21 (DE3) each containing a different protein expression construct were grown at 37oC in LB and induced with 1 mM IPTG at OD600 = 0.4.

Cells were incubated overnight and 1ml harvested. For both strains, pellets were suspended in 100ul, lysed, and 10ul electrophoresed on 4-12% polyacrylamide gels.

In lanes 1,3,4,5,6,8,9, and 10, the quantity of recombinant protein obtained from BL21 Gen-X™ cells was considerably greater and the background of endogenous E. coli proteins significantly lower 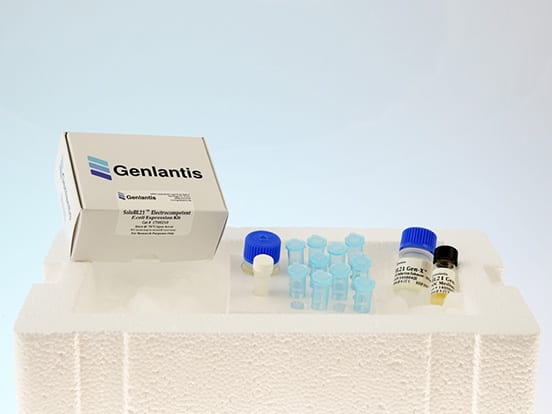